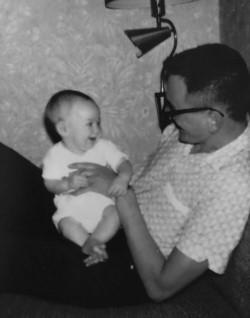 Six years and it feels like yesterday. Having lived through loss multiple times in my life, I know that grief comes in waves. Sometimes, it is all consuming and other times, you can manage it. As times goes on, you learn to move forward with it, and in spite of it, you live your life and you grow because of it. (If you haven’t had an opportunity to listen to this video, check out ‘We don’t move on from grief. We move forward with it.’ by Nora McInerny at https://m.youtube.com/watch?v=khkJkR-ipfw.)

Today, on the anniversary of my father’s death, with all that is going on around us with this pandemic, I miss him…his laughter, his sense of humour and his zany ability to lift me up, whatever the circumstances.

So today, I remember stories passed on down to me over the years by Dad and his friends of his crazy childhood, realizing early on that I may have inherited my sense of adventure from his gene pool. School was not his passion, in large part because he was forced to write with his right hand when he was solidly a leftie, and the fact that his father didn’t see the importance of getting him glasses so that he could actually see what was going on until well after he left high school. So, he made up for his ‘learning’ in other ways. He was the boy who let hedgehogs loose in a crowded movie theatre (all about cause & effect, and physics – at what speed would the hedgehog have to go before eliciting the first scream?)…the child who built an ice blockade across a busy street in the hopes of watching cars careen through it, only to be stopped by the first car to turn the bend, an RCMP officer (more cause & effect, some physics and definitely all things tied to law enforcement). He played knock-on-ginger relentlessly, learning early on in his childhood the benefits to being able to outrun everybody in his neighborhood (definitely some math tied in there). He may or may not have been one to turn down a dare, and although I can’t confirm it, there are tales of a streaking adventure at some point. Whether or not he shared all of the goings on of his growing up years, we absolutely got a few laughs out of these stories, the wild child that he was.

As we grew up, his love of life didn’t stop, nor did his love of learning. He still kicked up his heels on the dance floor with Mom, was quick to laugh at somebody’s joke and was surrounded by our friends regularly, drawn into his circle with his easy smile and sense of humour. He was everybody’s favorite uncle and a crowd favorite at a party. At the same time, he read everything in sight, taking in information about what was going on in his world. Despite his questionable career as a student, the man was brilliant and continued to be curious about everything until the end.

Above all this and aside from a love of life and a somewhat ‘out-there’ taste for adventure, Dad also passed down what I believe to be his greatest lesson to me, something that I have taken to heart and do my best to live up to.

‘Don’t regret your mistakes…learn from them.’

He laughed often at his past, but he spent his life growing as a person, accepting those ‘wrong decisions’ as life lessons. That may be why he was so accepting of  others and what drew my friends to him in the first place. What I know is that I’m a better person because of having him in my life for 50 years. So today, I remember him…his laughter…our friendship…his kindness…and his goodness. On this day, his anniversary, I miss him and I remember…today and every day.

One thought on “Missing Him”